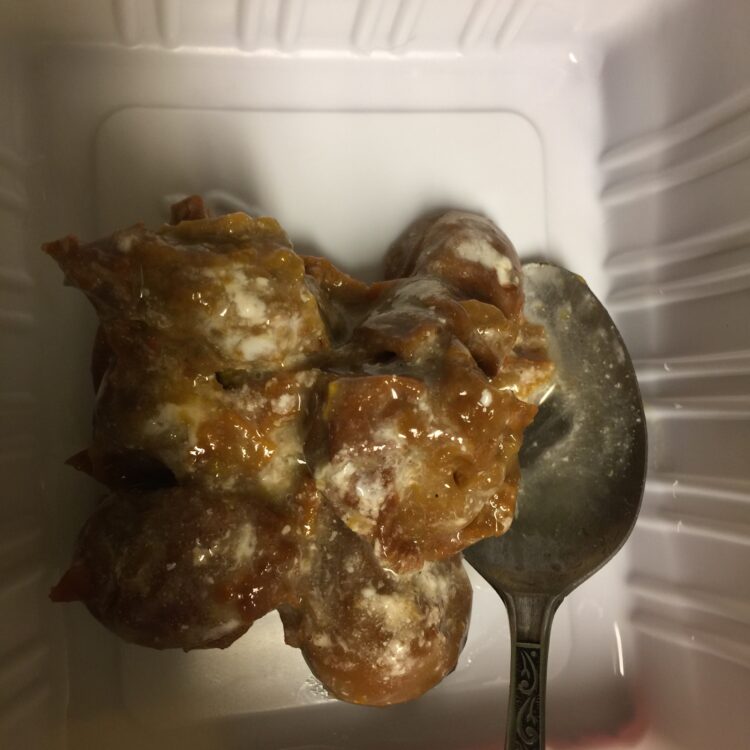 (I really don’t know where to put this, so I’m putting it on this site, which makes some sense, I suppose.)

My mom makes umeboshi, and we have a ume tree, so it’s cheap to do, and tastes good. Lately, we haven’t had good yields, so she used some ume that had fallen, and had broken skin. This is not recommended because it allows mold to get a foothold, and ruin the batch.

I thought that’s what I was seeing when the umeboshi were coated with white stuff. I thought it was mold.

After I took this photo, I found additional ume that had even more white coating on them. The coating was slimy.

So, I did some research, and here are some theories about what this is, and how I did one treatment that indicates this is probably a yeast infection.

The smell and flavor were totally normal. No hints of mold flavor (like blue cheese, or bread mold). They also smelled like umeboshi, not something else.

So, I assumed it might be a mold that doesn’t taste horrible, but might do some harm. I ate one on rice, just to see if I’d get sick the next day. I did not.

Umeboshi contains a lot of salt, and one side effect is that the salt crystalizes on the surface of the fruit as it dries.

I tested for efflorescence by scraping off a small amount of the white material, and then trying to dissolve it in water. The amount of visible white material decreased, or dissolved, but there was still some left in there. Maybe 20% of it.

Then, to test that the water would dissolve salt, I put a pinch of salt in my spoon, roughly the same amount as what I had of the white material, and stirred it into the water. After around a minute of stirring, the salt crystals completely dissolved, while the white material remained largely unchanged.

I was having trouble finding any English language material, so I decided to seek out Japanese information. I don’t read or write Japanese, so this was a challenge, but I used Bing and Google’s online translation tools to find my keywords. They were “umeboshi” and “mold”. For “mold” I needed to use the word for kabi, which means the kind of mold that grows, not the kind you use to cast metal or plastic.

I put these into image search to find pages that discussed these issues.

Many people in Japan had problems with their umeboshi, and people came back with answers. The answers indicated that the specific kind of growth I had was probably a yeast growth, not a mold.

Moreover, they had eaten it without ill health, and also had a treatment: during pickling, pour some plum vinegar over the umeboshi. The acids help kill the yeast.

Cleaning the Umeboshi with Vinegar

The result of one night of soaking was that most of the yeast were gone, or at least not visible. This is a photo of the ume flipped over, so the soaked side is visible.

I’m going to assume that this vinegar treatment worked, and this is a yeast growth.

The vinegar treatment solution was also supported by this paper, about preparing lower-salt umeboshi by using chile seed extract and vinegar to preserve the ume.

Basically, you lower the pH to make the environment hostile to yeast.

I did searches for the four yeasts mentioned in the paper, and the candida yeast looked most like the yeast on the ume. However, I have no way to verify the identity of the yeast.